A currency swap agreement with China has assisted Sri Lanka to raise its foreign exchange reserves to around $3.1 billion, Reuters reports.

According to the agency, the reserves had been topped up after a $1.5 billion currency swap with the People’s Bank of China was finalized on Wednesday (29).

Central Bank Governor, Ajith Nivard Cabraal, said in a tweet on Wednesday (29) reserves has risen to around $3.1 billion and would remain at that level until year-end. 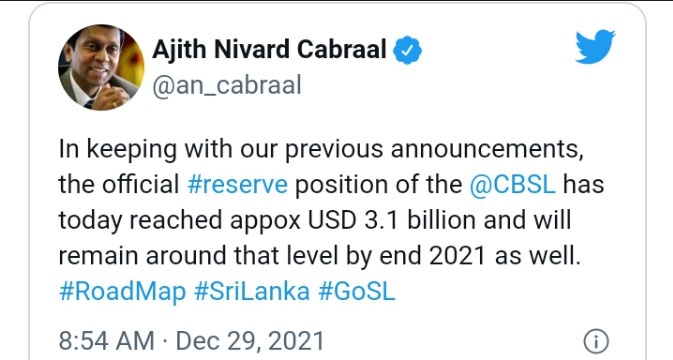 Subsequently, the CBSL confirmed the foreign support but did not specifically reference the Chinese swap arrangement. Cabraal has previously spoken about the swap with the PBOC.

“Foreign currency inflows in connection with several other facilities that are under negotiation at present, are expected to be realised in the early part of January 2022,” CBSL also said in a statement.

“The government and the central bank are confident that the reserve position will remain at comfortable levels throughout the year 2022,” it added.

Reuters, citing a source said that the swap was denominated in yuan but could be converted into dollars if needed.

Sri Lanka has to repay about $4.5 billion in debt in 2022 starting with a $500 million international sovereign bond maturing on January 18th.

The country has been looking to add to its reserves through various means including bilateral swaps and loans from other Governments and central banks, increasing remittances, curbing imports among other measures.

China is Sri Lanka’s largest source of import income and a key financier having lent over $5 billion for various infrastructure projects including ports, highways and a coal power plant over the past decade.

Fitch Ratings on December 18th downgraded Sri Lanka’s sovereign rating to ‘CC’ from ‘CCC’, citing a growing risk of debt default in 2022, despite central bank assurances that steps would be taken to meet all repayments.