Sri Lankan authorities were helplessly watching as an audience for two weeks until the Singapore-registered X-press ship had been on fire until its oil spill into the deep waters of the sea.

Experts noted that if the oil tanks that carry hundreds of tons of oil were to sink and spread, there would definitely be destruction of epic proportions to marine life in Sri Lanka.

The ship carries 25 tons of nitric acid, along with other chemicals and cosmetics in the very moment it's blaze started to appear.

Also, millions of plastic pellets which are used as raw materials for shopping bags have already coated stretches of Sri Lanka's western coastline.

This threat was hit especially throughout the sea belonging to the beaches of Negombo city and there was a possibility that these plastic pellets could travel as far as India, Indonesia and Somalia.

Foreign policy analysts said that this could even lead to diplomatic tensions due to the negligence of Sri Lankan authorities.

While naval boats and air crafts are monitoring the wreck, a navy spokesperson revealed to AFP that “there is no oil leak from the ship yet, but if the possibility of an oil spill becomes a reality, the environmental situation will be worse.”

Though the experts opined that the bunker oil may have burnt out, the authorities are preparing for the worst situation, said an official. 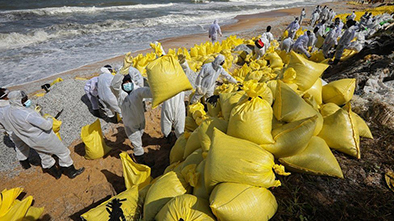 Biden nominates Julie Chung as US Ambassador to SL