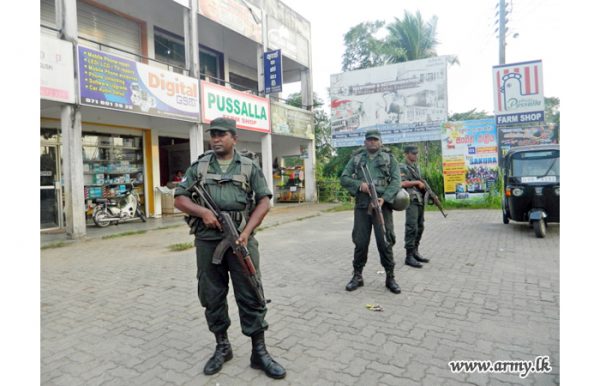 N M Ameen is not a man known for wearing his sadness on his sleeve.

The avuncular 44-year veteran of Sinhala and Tamil Media in Sri Lanka is now Editor of the Navamani newspaper and President of the Sri Lanka Muslim Council.

As a Media activist he has fought against censorship and violence perpetrated on journalists.

On May 9 he became a victim of the very media he has sought to free.

At a press conference Ameen quoted President Maithripala Sirisena as saying many homes in Sri Lanka keep swords to protect their women.

Hiru news decided to drop the reference to the President and present the statement as Ameen’s.

In a racially charged atmosphere fuelled by an incessant spate of video reports showing swords and knives recovered from Mosques and other Muslim sites, this quote took a life of its own.

Ameen was pilloried on social media.

An official complaint was made to Hiru, which did not apologise, but eventually ran the full video statement.

“By then the damage had been done,” says Ameen.

This is one of the many examples of irresponsible behavior by several leading Media outlets that unashamedly rode a wave of anti-Muslim sentiment during the weeks after the Easter Sunday bombings.

There were inflammatory stories, twisted and manipulated tales and outright lies.

Quite often stories are planted in the newspapers in the night and in the morning the broadcast channels read them out on their morning shows, conveying a message that caters to and reinforces a particular political agenda.

That anti-Muslim wave came from the mostly Sinhala Buddhist majority with known racist figures playing a part. There were quite a few from amongst the Christian community too.

What media outlets want are ratings and circulation. What they give the nation is fear, instability, and more insecurity. Always unafraid to articulate his Liberal position he said “Sri Lanka is not a Sinhala Buddhist country but a country belonging to all who have taken Sri Lanka as their motherland.”

Mangala is right but the racist attacks on him was like a tsunami.

Then he decided to fight back.

Last week he summoned the heads of state banks and asked them to withdraw advertising from the country’s most popular Television stations Hiru and Derana.

The state banks spend at least Rs. 4.5 billion a year advertising on TV and radio.

That is a whopping amount of money for this country’s media industry.

The ad ban is now widening. Advertising industry sources said the national carrier Sri Lankan Airlines as well as other major organizations are also withdrawing advertisements from the Hiru and Derana channels.

Samaraweera made this move because, he said, these two organizations were “spreading hate speech to provoke communal violence.”

A senior manager from Derana confirmed to RepublicNext that advertising had been pulled from them by all government institutions.

He also said that Derana is not dependent on government advertising so this will not affect them.

He rejected the charge that his channel was spouting hate speech and pointed out they had complied with Information Department requests not to show some items which may provoke rioters.

The Convener of the Free Media Movement Chandrasiri Dodawatte says if there is an issue of hate speech “then there has to be a proper, transparent process by which that should be dealt with.”

He has a point. There are Emergency Regulations, including several promulgated on Friday (17), by which the authorities can prosecute individuals or organisations for hate speech that incites a riot.

Ameen says “there are many ways the government could have taken action against this kind of reporting.”

“Stopping government advertising to these channels is not the way,” Dodawatte added.

Ameen too agrees that financial arm-twisting is setting a bad precedent.

But it looks like the government has decided to take direct action against these Media organisations rather than get mired in a legal swamp.

Sri Lanka does not have a clear and transparent government advertising policy unlike other countries in the region.

There are no regulations and whatever decisions that are taken with regard to the spread of advertising are not publicly known.

In Sri Lanka’s comparatively small market, the government, because it runs so many State Owned Enterprises, is the biggest advertiser.

Throughout our modern history, successive governments have sought to influence editorial decision making by placing or withdrawing advertisements.

In some cases it is known that newspapers with smaller circulation figures get substantial government ads while others with a wider readership get much less.

The behavior of many Media outlets has been horrifying and very damaging to the unity and integrity of Sri Lanka.

This is not the first time it has happened. During the war, for instance, the media was racially divided.

A martyr in one language media was a villain in the other language. Research done for the Centre for Policy Analysis by Dr. Arjuna Parakrama  in Media Monitor has given us a host of details about this type of manipulative reporting.

It has continued to keep the country divided and antagonistic.

During the 52-day period where the President sacked the Prime Minister and appointed the Leader of the Opposition to head the government some Media houses were openly partisan.

More public pressure should come on Media houses engaging in such journalistic practices.

At the same time the Editors and Journalists should, at least now, do some soul searching and desist from distortion and fake news.

That should be the way ahead so that the Media can play a unifying role.

But arm-twisting the Media by withdrawing advertisements is not the best method.