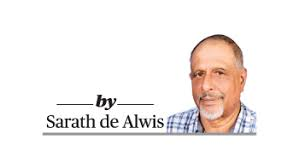 “The rhetoric of hate is often most effective when couched in the idiom of love…. Truth is all around us…Truth is wherever man has glimpsed divinity.” ~ From Gore Vidal’s novel on Roman Emperor Julian

The script of ‘Mangala’s Mistake’ is simple and straightforward. It begins with a pervasive silence of our collective complicity with an untruth.
Mangala decides to pierce the conspiracy of silence with the obvious truth. It is a grave mistake.

You cannot argue with the custodians of Sinhala Buddhism. You cannot question its preeminence in the Sri Lankan polity. That is their exclusive preserve.

They operate on the simple principle that only the fish can study marine biology. Mangala is not a fish.  Dabbling in Marine Biology is not his business.

Now, poor Mangala finds that he has made a controversial statement. It has snowballed into a painful reproach against our collective pusillanimity. Mangala is pilloried.

Even those who share Mangala’s values do not wish to be reminded of or discuss their neutrality to truth.

Mangala is not a run of the mill politician. If he was, he would not have made this ethically correct, politically erroneous statement that SriLanka was a country where Sinhala Buddhists were the majority, but all were equal citizens irrespective of their ethnoreligious diversity.

On the face of it, none can dispute its core content. That is if one subscribes to the   overall assumption that we are a plural multicultural democracy.

But it makes an impudent challenge to the Sinhalese Buddhist cosmic order which protects the land destined to be the repository of Theravada Buddhism, protected by ‘Satharawaram deviwaru’ – the four guardian deities.

His bold but hopelessly starry-eyed attempt to defend and promote   the idea of a civic nation- an inclusive Sri Lankan nation in the present exceptionally incendiary climate is unfortunate. He would be lucky to have any defenders.

This writer counts himself as one of those defenders. But the price is high. Refusing to take part in ‘a lie’ is a simple courageous step.  Such situations are neither new nor unexampled. They have happened before and will happen again. That is how nations progress and defenders of truth are remembered in history.

Mangala can take solace in John Steinbeck the novelist who gave his finest work, the biblical name ‘Grapes of Wrath.’ “It takes great courage to back truth unacceptable to our times. There’s a punishment for it, and it’s usually crucifixion.”

Addressing the gathering of the ‘Jathika Maga’ movement at the BMICH, he has said that we were people of one nation, but it was a Sinhala Buddhist country.

Mano Ganesan whose constituency consists of Tamils permanently domiciled in metropolitan Colombo has very sensibly explained why he holds that view.

Mark the distinction. Mano Ganesan does not say Mangala is wrong. He merely observes that Mangala’s statement is not good.   What Minister Mano Ganesan attempts to tell us is that what Mangala has stated is not good, convenient or politically prudent.

The reference to Sri Lanka’s Buddhist ethos of tolerance by his eminence Cardinal Malcom Ranjith made eminent sense.

However, his parable of the Buddhist older brother and younger siblings of other faiths baffled me. My bafflement is on the simple logic that rejects a hierarchical classification of moral purity – the essence of all religions.

On this issue I am open to correction.  I possess no deep insight to comparative religions. It never occurred to me to explore the subject. I have a  deep and abiding aversion to all categories of opiates.

The confusion over Mangala’s statement was soon resolved quickly firmly and with absolute finality by Venerable Mawarelle Bhaddiya thero who addressed the ‘Jathika Maga’ parley at the BMICH on Tuesday. He presented an eloquently framed proposition.

When His eminence the Cardinal has pronounced that ours is a Sinhala Buddhist country, what is Mangala groaning about?

The persuasive rhetoric of Venerable Mawarelle Bhaddiya thero  has an irresistible resonance with the theory of ‘spontaneous consent’ with which the masses concede to the hegemony of a dominant group proposed by the Italian Marxist theoretician Antonio Gramsci.

He wrote extensively on it, while languishing in one of Mussolini’s prison where he finally died.

Although he does not offer a clear-sighted definition of cultural hegemony (he was weary of his Fascist prison censors) Gramsci explained the process of ‘spontaneous consent’.

Mangala’s rejoinder should have really come from the JVP that calls itself a Marxist party. But how can Sinhala Buddhist Marxists commit that kind of heresy?

The ruling group determines the direction of the social discourse. Subordinate groups are manipulatively persuaded to come on board.

Consent is a complex mental activity – a “contradictory consciousness” mixing resistance and resignation or approval and apathy. Oscillating between approval and apathy is the lot of Mano Ganeshan grappling with the serious task of national reconciliation.

In this heated climate we are missing the point. This is not about the sanctity of belief systems.

Underneath the verbiage of heritage and purity of tradition there is a hegemonic consensus that defines access to wealth and power. The real

debate is about the power relations that developed in post war Sri Lanka.

In 2012, Professor Nira Wickremesinghe made an incisive inquiry into the state sponsored project to shape the present by postulating history as heritage.

In the post war period, the study of history was quietly abandoned to the mercies of film producers and perception engineers advancing the political project of the state.

The versatile actor Jackson Anthony replaced the Distinguished Scholar Senarath Parnavithane as our interlocutor with a past that was once obscure but now offering immense  possibilities harking back to the days of Ravana.

The irony of it all is that the government was in deep slumber just as Kumbhkarna the laid back brother of Ravana was when Islamic terror hit us on Easter Sunday.