“Hire a monk,” has become a political strategy. Former President has a virtual headquarters in a temple at Narahenpita. This sync is a living one and the trend is dangerous both to the Buddhist religion and to our politics. 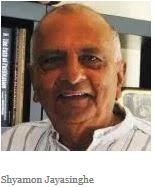 Why Clergy is not Suited to Advice, Anymore

Once again, I observe the Sri Lankan clergy coming out to ‘advice,’ Sri Lankans in this time of crisis. The simple fact is that they are not competent any longer to occupy a privileged position in the advisory panel. In the ancient days of the kings, it would have, understandably, been a different situation when Buddhist clergy represented the educated class and pirivenas were the centres of learning. Since then, the narrative took a different turn. Now, the lay educated classes are way above the knowledge level of monks in general.

As a matter of fact, the monks should think twice before giving bana these days. I have hardly listened to a sound and insightful bana for ages. Banas have become ignorant yawns and the occasion is more for socialising.

How many of our monks have had a general education above A’level-which is the basic minimum?  Most of them spend their time in temples memorising Pali texts and studying languages. Even those with degrees are tighlty framed within the ancient languages. They learn no economics, sociology, psychology, politics, anthropology, science, literature etc. They are never in touch with global discourse over topics of contemporary relevance.

The Christian seminaries are a bit better curriculum-wise but, here too, at bottom those aspiring to become priests have barely A’levels. They get bogged down to a life of mucking up the Bible and other sacred texts. This is theology, and theology does not impart knowledge of the empirical world. Theology cannot yield knowledge about existential life.

However ignorant, the sanga has clout in our society because of the robe they put on. Hence, politicians love them. Mahinda Rajapaksa and his cohorts address them reverently as “Ape Hamuduruwane”!As a youth studying at Peradeniya long ago, I witnessed what most of today’s Sri Lankans did not. SWRD Bandaranaike and his MEP brought the clergy onto the stage in 1956 and gave them a big place. The slogan then was: “Veda Gurus Sanga, Govi Kamkaru”!

Banda won with a thumping majority. Within two years, two monks murdered him! They were Buddharakkhita and Somarama. I have vivid memories of visiting the chambers of Buddharakkhita at Kelaniya Rajamahavihara. As a youth in impressionable years that was a shock to see bottles of whisky, gin and wine! But every Buddhist had to worship the bloke. Had Buddharakkhita not assaninated a VIP he, perhaps, would never have seen a jail cell.

Post Buddharakkhita, ordinary people began chasing away political monks and for many decades we did not see these saffrons on stage. Particularly, with the coming of the jaathyalaya regime of Mahinda Rajapaksa the political monks were back again in full fold. Some even had the audacity to enter parliament.

Peoples’ memories being short, we now see a resurgence of monks. The Catholic Cardinal Most Revd. Malcolm Ranjith has also joined the latter making politically correct pronouncements all the time as crowd -pleasers.  Before Malcolm Ranjith, Catholic clergy kept a dignified distance from politicians. At local level some of these did engage in political canvassing but that had been discrete and not widespread.
We heard our Cardinal pontificate the other day that Sri Lanka is a Sinhala Buddhist country! Did he realize that he was compromising his own Catholic flock to a secondary position as citizens? Virtual guests? The latter must pick the crumbs left over by Sinhala-Buddhists? No right to demand equality of treatment? Poor Malcolm Ranjith does not know the logical implications of his public utterances.

I have had occasion in the past to draw references to this Cardinal’s political flirtations during Mahinda’s regime. One of my readers, A PhD Catholic columnist for Colombo Telegraph, commented that this sacred gentleman had placated the former President for favours in the way of getting his relatives into the foreign service. If this were true, there we go…

On another occasion, the Cardinal mentioned as a reason for the rise of the new terrorism the change that took place in government.
Undoubtedly, the Cardinal had to have a say when the slaughter of the ISIS took place in churches during mass. No grudge over that. But remember the Cardinal initially urged the destruction of the attackers but soon became more Christ-like by uttering Mother Teresa language. Over this simple one-act transformation somebody thoguht the Cardinal was fit for the Nobel Prize for Peace. We are aware that the Nobel prize is never awarded for singular acts of micro behaviour like this- except for American leaders like Obama who got it for uttering mere niceties and pleasantries. Unfortunately, our Cardinal is not of Obama standing.

This monk is the new rising star among public advisors. He was brought in to speak before a big audience the other day at the BMICH. He looked around for Cardinal Malcolmn Ranjith who had been invited. Malcolm Ranjith, in an act of rare wisdom had not attended. However, Hon Speaker Karu Jayasuriya was there and some others of the educated fraternity. His speech is viral over Yutube. Maraliaya Bhaddiya showed the demeanour of a true Rahathan wahanse-speaking as he did softly, to the point and in careful and benevolent tone a manner. However, he mischievously tried to put the security lapse on Prime Minister, Ranil Wickremesinghe. He said: Our Prime Minister did not attend Security Council meetings because he was not in good terms with Presdient Sirisena. This was a lie (musawaada) and herein the monk violated one of the precepts. The fact is that the PM was not officially a part of the Security Council and this had been a deliberate omission by the man of the Maitree Yugaya. The monk cast no blame on the Opposition’s role. Revd Mawaraliye Bhaddiya also used the occasion to flay Minister Mangala Samaraweera over the latter’s statement that Sri Lanka did not belong to Sinhala Buddhists. As we shall see, Mangala had a valid point, which he thought he must express unafraid. On the other hand Revd Mawara Liye set that aside.
The monk’s hidden agenda was disclosed. However, the gullible in the audience saw the monk as one about to shoot up to Rahath status. Hope he does not start walking on flowers and having lavish birthday parties like the one who has gone famous over claims of having reached Rahath!

Corruption has Taken over the Sanga

There is no denying the obvious: Our Sanga has become largely polticised and corrupt. This is yet another reason why the sanga can no longer be advisor. Corruption and politicisation go together. Our politicians are using members of the Sanga to push their own selfish agendas. Few among this august body have been able to withstand the pressures that material perks bring. “Hire a monk,” has become a political strategy. Former President has a virtual headquarters in a temple at Narahenpita. This sync is a living one and the trend is dangerous both to the Buddhist religion and to our politics. One monk publicly advised Gota to become a Hitler.

Against a background of political duplicity, political humbug, and political mendaciousness Minister Mangala Samaraweera impresses as a public figure who is unafraid to speak the truth. Mangala has been doing any job given to him very competently and today he stands as a very sound Minister of Finance. Unlike the UNP’s upper flank of Deputy Leaders, Party Orgainsers and so on Mangala fights for his leader and his government.

Now, what is the sin that Revd Mawaraliye talks of that Mangala had committed? The Minister said that Sri Lanka belongs to all Sri Lankans and that, therefore, it is erroneous to call the island a Sinhala Buddhist country. By itself the island known as Sri Lanka is a mere landmass.

Along with demographic changes of populations the composition of the population of all such countries do change. This is a natural process. What would happen in the future one never knows.  What if the Chinese take over? Right now, Sri Lanka has a big majority of Sinhala Buddhists. This does not give Sinhala Buddhists any birthright of national ownership.

The Minister had a purpose in making this utterance. He wanted to set out the logic of the necessity of all inhabitants in the country living in harmony and cooperation. Any claims of superior position by one segment of the demography necessarily has the potential for violence. Our recent history has proved this at great cost to the nation. Sinhala Buddhists must wipe this out of our minds if we are to keep peace.
Directly or indirectly, consciously or subconsciously most Sinhala Buddhists  bear this notion of superiority. Most of our monks, too, share and pedal this dangerous ideology. Politicians revel in this idea and exploit that to the full. Sri Lanka can never retain peace on this basis. Most persons -lay or clergy- are too focused on petty issues of inter- ethnic relative privilege. This makes us a population geared to bicker within ourselves. The overarching need to make correct economic policy that encourage prosperity recedes into the background whereas that should be in the foreground. Crushing another ethnic or religious group becomes more important. The country is going down the drain.

Minister Mangala Samraweera has solidly avoided this kind of parochialism. He shares the view of the Prime Minister as to what the country should head for if it is to lift itself from poverty and enter the realm of prosperity; they have both identified the central dynamic required for that. The dynamic is to energise entrepreneurship.  The project captioned “Private enterprise Sri Lanka,” is just that. This is the road to prosperity.

Our monks and clergy in general have never been known to focus on the real thing. They must, surely, quit advising us.