The importation of a large stock of crude coconut oil with impurities has opened big can of worms following the denial of Sri Lanka Standards Institution (SLSI) that it has not issued any directive to Sri Lanka Customs to release 13 substitute coconut oil containers now in detention.

The Food Safety Unit of the Health Ministry recently confirmed that a highly carcinogenic substance was identified in a stock of imported crude coconut oil.

Concerns were raised as reports claimed 13 containers with 183,000kg of coconut oil were released by the Customs.

However, the Customs clarified that the containers were released only to the warehouses of the respective companies. Upon receiving the quality inspection reports on March 04, the relevant coconut oil stock was ordered to be re-exported, the Customs stressed.

Health Ministry’s Food Safety Unit stated that samples were directed to a government-approved laboratory for a subsequent test following the requests made by the companies that had imported the relevant coconut oil stock.

Meanwhile, the SLSI rejected the allegations in the media and social media claiming that senior officials of the Institute had authorised the sale of unhealthy coconut oil imported to the country by four importers.

The SLSI dismissed the claims as “totally fabricated and false." 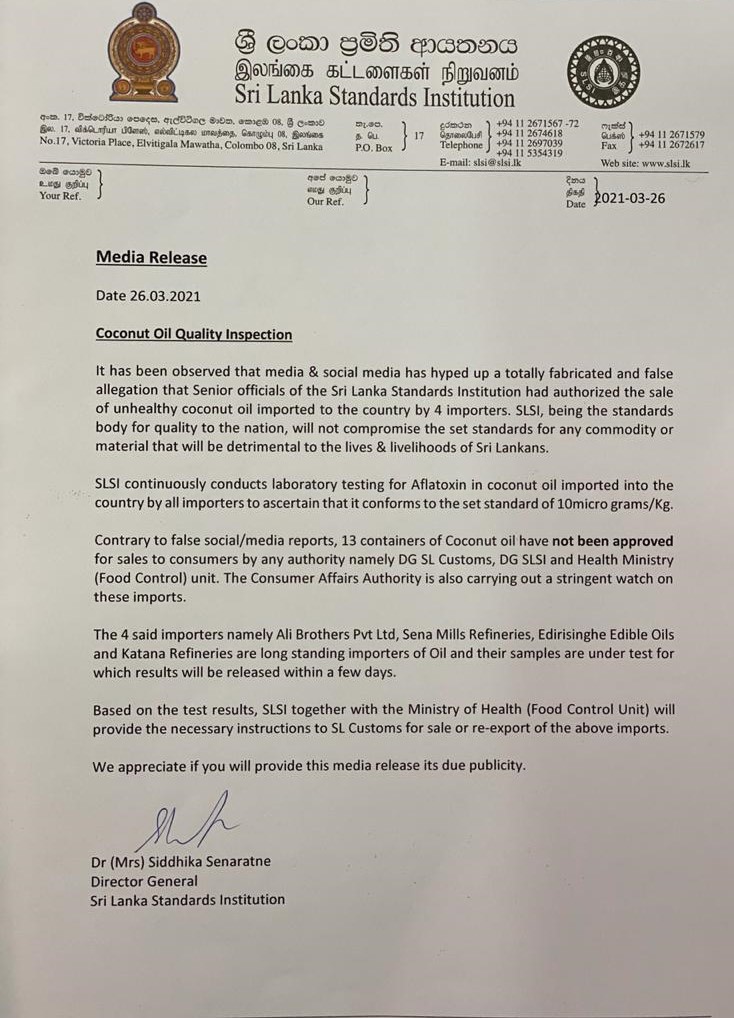 The Chairman of the All Ceylon Traditional Coconut Oil Association said that the SLSI has issued a clearance certification to Customs claiming that samples of questionable stocks were with permissible ‘aflatoxin’ level.

The Food Safety Unit of the Health Ministry has found ‘aflatoxin’, a substance harmful to human body in oil samples of several containers containing crude coconut oil stocks imported into the country by two companies out of four.

But despite this detection of the Food Safety Unit and its subsequent directive to re-export those coconut oil containers, the Sri Lanka Customs has released it to relevant importers to keep it in their warehouses as the testing for ‘aflatoxin’ in oil samples of some containers are still continuing.

Sri Lanka Customs is also not in a position to reimburse the special goods duty paid by importers as taxes when they clear their disputed coconut oil containers if those stocks are re-shipped in accordance with Food Safety Unit’s directive.

Two companies have imported 183,044 kg of coconut oil, a senior Customs official said, adding that they are not keeping that oil in the department yards as the normal procedure is to release it to ware houses maintained by these companies.

Another 50 containers which are suspected to have been containing carcinogenic coconut oil are currently lying at Colombo Port, out of which 13 have been already released by Customs to keep it in their ware houses till the completion of oil sample testing for impurities.

The previous and present government’s action to encourage importers to bring down coconut oil from countries like Philippines, Indonesia, and Malaysia.

The aim is to reduce high coconut oil price in the market and the scarcity of coconuts, a senior official of the Coconut Development Authority (CDA) said.

The CDA is also considering this practice as a short term solution for coconut industrialists to raise their heads after struggling in the corona virus storm.

A close study of the import policy of the Sri Lankan government on such oils indicates that import tariffs on coconut oil are lowered when the supply of fresh coconut in the domestic market is limited.

The Finance Ministry has introduced a flexible taxation on Coconut and palm oils to prevent the sky rocketing of prices of coconut oil especially during the festive period.

A special commodity levy of Rs 125.000 per ton of crude coconut oil (Rs 125 per kilo) and Rs. 250, per ton of palm oil (Rs 250 per kilo) have been imposed by the Finance Ministry following this procedure.

Companies which are involved in the importation of crude oil are normally refining and purifying it before releasing it to the market with minimum impurities which are not harmful to consumers, industry sources said.

But some fraudulent local coconut oil producers were mixing coconut oil and substitute oil and selling it in the market with impurities, they pointed out.

According to the SLSI 962 method, the product shall not exceed the level 5 μg/kg for ‘aflatoxin’B1 and 10 μg/kg for total ‘aflatoxin’.

Issuing a media release, the Director General of the SLSI, Dr. Siddhika Senaratne said that those samples are still being tested at the institute's laboratories and therefore no direction has been issued to release the stocks of oil accordingly.

Based on the test results, the SLSI together with the Food Safety Unit of the Health Ministry will issue necessary instructions to Sri Lanka Customs for sale or re-export of the containers under detention.

The Consumer Affairs Authority (CAA) is also empowered to conduct random checks on coconut oil in the market and test them in CAA laboratories.