The great 'forensic audit allergy'
By Janitha Devapriya
There is one person in this country who is very disturbed by the forensic audit reports on the bond issues and raising of public debt by the Central Bank of Sri Lanka, tabled in Parliament on 21 January 2020 and that person is none other than Ajith Nivard Cabraal, former Governor of the Central Bank and one-time President of the Sri Lanka Institute of Chartered Accountants.
He headed the firm Cabraal Consulting Group which specialised ironically in corporate governance. From the moment it was announced that five forensic audit reports on the Central Bank bond transactions and raising of related public debt was due to be released, he was running like a man whose pants were on fire and started writing in the guest columns of reputed English newspapers with disparaging remarks on the conduct of the forensic audit and the Central Bank, not sparing the Presidential Commission of Inquiry (PCOI) appointed to investigate the bond transactions from 1 February 2015 to 31 March 2016.

He went to the extent of writing a book on the forensic audit that was conducted, faulting the Central Bank and the previous Government on the manner in which the audit was commissioned and picking holes in the PCOI conclusions and its recommendations and also commenting on possible findings in the forensic audit report. It is now possible to see why this forensic audit caused much anxiety to Cabraal.

In the guest column of the Weekend FT of 25 January writing under the heading ‘Forensic audits part of bond scam cover up,’ Cabraal attempts to paint a picture that the probes COPE committee inquiries and PCOI investigations are all ‘non-punitive’ investigations initiated to enable perpetrators to evade arrest.

The bond issue of 27 February 2015 and those up to March 2016 do not strictly fall into the category of fraud but they can be irregular and not in compliance with the applicable rules, practices and norms. For an act to be termed as a fraud, the elements constituting fraud have to be established, namely, (1) a representation of a fact that is false (2) its materiality; (3) the representer’s knowledge of its falsity and his intent that it should be acted upon by the person to whom the fact is presented (4) the injured party’s ignorance of its falsity and his reliance on the fact, believing it to be true and (5) the injured party suffering loss or proximate injury.

In the case of the February bond issue in question, it cannot be easily determined who made the representation (Primary Dealer or Central Bank) and who is the victim because the bond transaction took place in an auction where ‘bid’ and ‘offer’ were in operation. The probable criminality therefore comes into play if it can be established that there was insider trading in respect of the Bond issue and the nexus between former Governor Mahendran and Perpetual Treasuries which needs to be proven with evidence. It is therefore practically not possible for the CID to investigate these transactions and related information and the best possible methodology that was available was the appointment of the Presidential Commission.

He goes on to state that former Prime Minister Wickremesinghe made a direct proposal to the Bond Commission and based on it, the PCOI recommended a forensic audit. It is pertinent to quote the relevant recommendation of the PCOI:

“As set out earlier, there is adequate evidence before us to form the view that, there is a likelihood that some irregularities have taken place in the acceptance of direct placements prior to 2015. Therefore, we recommend that, an appropriate investigation be carried out to ascertain whether there were significant irregularities in the acceptance of direct placements by the Public Debt Department during the period 2008 to 2014 and, if so, to identify the officers of the Public Debt Department and the superior officers of the CBSL, the Primary Dealers and any other persons who were responsible for such irregularities. Such an investigation should also seek to compute the losses, if any, which may have been incurred by the Government as a result of any such irregularities. A forensic audit may be appropriate.” 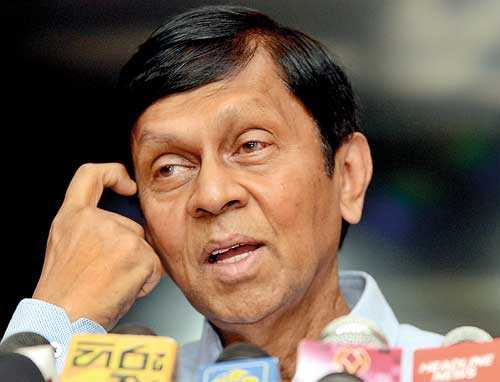 Ajith Nivard Cabraal, a Chartered Accountant and former Governor of the Central Bank, argues that both the Bond Commission Report and the forensic audit, the outcome from it, are faulty and not reliable and the forensic audit was carried out to ‘whitewash’ a certain political authority. He therefore implies that these reports should be rejected – Pic by Shehan Gunasekara

It is therefore evident that the PCOI recommended the forensic audit based on the facts presented to it and not because of any suggestion or proposal by Wickremesinghe or anyone else.  The forensic audit report he says was purportedly converted into an instrument to sling mud at the ‘pre-2015’ political authorities and Central Bank administration based on inaccuracies, distortions and downright lies and its main purpose was to whitewash the corrupt Wickremesinghe administration.

In his previous article on 4 December 2019, Cabraal faulted the Central Bank on the manner in which auditors for forensic audit were selected. The Central Bank clarifying the position on 21 January 2020 stated: “a) the Monetary Board, in consultation with the Auditor General and the Attorney General, took measures to commission six forensic audits pursuant to the recommendations of the Presidential Commission of Inquiry appointed to investigate and inquire into and report on the issuance of Treasury bonds and matters that had come to light over the recent years in audit reports and in findings of internal investigations pursuant to the exercise of certain regulatory and agency functions undertaken by the CBSL. b) The procurement of the five forensic audits were carried out by a Cabinet Appointed Consultant Procurement Committee and the contracts were awarded to audit firms with a global practice and international experience in forensic auditing with the approval of the Cabinet of Ministers.” The auditors selected for the forensic audit were Binder Dijker Otte or BDO (India) and KPMG Sri Lanka. BDO is an internationally-reputed firm of auditors associating with public accounting, tax, consulting and business advisory firms with member firms in 162 countries, especially in Europe and KPMG are well known in Sri Lanka as highly-reputed auditors. BDO and KPMG are firms that will never engage in assignments to whitewash any institution, company or individual and taint their own reputation which is held in high esteem worldwide.

Cabraal goes further to denigrate the forensic audit stating: “In fact, the unprofessional ‘cherry-picking’ of data, seriously flawed analysis, inaccurate findings, deliberate overlooking of material facts, obviously false findings, and blatantly biased conclusions confirm that the purported Forensic Audits were engineered by those vested interests.”  He adds blatantly-politically motivated undertones are reflected in the purported forensic audit reports. These unsubstantiated and inimical comments are intended to discredit the internationally-renowned auditors.

He tries to argue that since the forensic audits were carried out under the authority of the Monetary Board as stated by former Governor Dr. Indrajit Coomaraswamy and because the Board comprised Chrysantha Perera and Dr. R.H.S. Samaratunga under whose watch the alleged bond scams took place, the forensic audit is hopelessly compromised.

Cabraal deliberately fails to mention that Dr. Coomaraswamy was in fact the Chairman of the Monetary Board as Governor and any taints in this regard therefore should rub on him as well. He is bragging about steps that will be taken to professionally refute and deal with various ‘innuendo and insinuations’ reflected in the reports. He is however careful not to reveal the comments or findings in the reports, on which he will do this. It is foolish and unprofessional on the part of Cabraal to tarnish the reputation of audit firms like BDO and KPMG.

Giving himself a clean certificate

He is giving a clean certificate to himself on the bond issues from 2006 to 2014. The bond issues during that period is covered in the forensic audit reports and more startling facts will come out. However, his precarious adventure in buying non-investment grade Greek bonds that cost the country Rs. 3.4 billion and his engagement of lobbying firms and others for services not coming under Central Bank’s purview costing around Rs. 340 million (Sunday Times 13 September 2015) and also the cost to the country of Rs. 9.7 billion resulting from the hedging deal on petroleum in which it is widely believed that Cabraal had been a prime mover. So it is not wise to throw stones from a glass house.

He quotes the possible loss due to change of procedure for bond sales in February 2015 could run up to Rs. 1 trillion. How he calculated this is a mystery. Governor Cabraal tries to emphasise that the switch to auction process when issuing Treasury bonds had paved the way for perpetrating a ‘scam’ and the previous process of direct placements was transparent and scientific and it had enabled the exchequer to save billions. Only Cabraal can explain the logic in this contention.

As Governor and Chairman of the Monetary Board, he is responsible for the reckless investments and unnecessary expenses incurred by the Central Bank during his watch as chief and the colossal loss to the country is irrecoverable. He will certainly try to blame others for these losses.

Whilst trying to undermine the forensic audit and create doubts in the minds of the public, he also casts aspersions on the Presidential Commission of Inquiry which investigated bond issues during the period 1 February 2015 to 31 March 2016.

To cite one instance, he writes in his article to Daily FT on 4 December 2019: “In this connection, it is very strange that the Bond Commission has not considered the following factual certainties and not ‘likelihoods’ in making their recommendation to carry out a forensic audit.”

It is relevant to recall that the Presidential Commission of Inquiry appointed to look into the bond issues from 1 February 2015 to 31 March 2016 comprised of eminent judges of the Supreme Court Justice K. T. Chitrasiri and late Justice Prasanna Jayawardena and retired Deputy Auditor General Kandasamy Velupillai. His derogatory remarks on the PCOI also harms the reputation of the Commissioners, who did a meticulous job of investigation and evaluation of facts and evidence to produce a brilliant report with far-reaching recommendations.

Ajith Nivard Cabraal, a Chartered Accountant and former Governor of the Central Bank, argues that both the Bond Commission Report and the forensic audit, the outcome from it, are faulty and not reliable and the forensic audit was carried out to ‘whitewash’ a certain political authority. He therefore implies that these reports should be rejected.

Well, if that be the case, former Governor Arjuna Mahendran and Perpetual Treasuries implicated in the said irregular bond transactions should be exonerated and indictments filed against him and the primary dealer in courts should be withdrawn.