Reviving a stagnant economy and managing the country’s relations with major powers will be important priorities for the new Rajapaksa government.

The party gained 145 seats to obtain a near two-thirds parliamentary majority, underlining public support for the government’s successful management of Covid-19 and securing the mandate of President Gotabaya Rajapaksa, the younger brother of Mahinda elected in 2019.

Speaking with the Asia Society after the younger Rajapaksa’s triumph last November, Dinusha Panditaratne, an expert on Sri Lankan foreign affairs, said the new president’s view of Sri Lanka’s place in the world could be summarised as “Sri Lanka must develop itself,” alluding to an emphasis on the word “development” which appeared over a 100 times in Rajapaksa’s election manifesto.

Central among the government’s domestic challenges will be to revive a heavily indebted economy expected to contract by 3.2 percent, with the pandemic hitting the country’s tourism industry, which already faced a downturn after the Easter terrorist attacks in 2019.

To do so, Colombo plans to drive an economic development agenda by itself and as a partner with other countries while leveraging its strategic importance.

“The new administration will be able to take more decisive steps given the ideological alignment of the prime minister, president and parliament,” Dr. Kadira Pethiyagoda, a foreign policy expert and author of ‘Indian Foreign Policy and Cultural Values’, told TRT World.

Pethiyagoda suggested that a development-led engagement with China and its flagship Belt and Road Initiative (BRI) would feature prominently, as a realist approach to foreign policy that balanced great powers like the US, China and India with its own interests was likely to be pursued.

A crushing $55 billion debt burden, coupled with geopolitical competition underway in the Indian Ocean, are likely to be significant factors in determining the direction of its foreign policy.

In the immediate aftermath of the August election, a number of developments might indicate that the orientation of the government’s foreign policy has begun to take shape.

One has been the responsibilities assigned to the newly appointed Minister of Foreign Relations Dinesh Gunawardena, who now wields the ability to reevaluate existing bilateral agreements and remove clauses considered economically or socially harmful.

Another is the creation of the ‘state minister of regional co-operation’ portfolio, to be helmed by Tharaka Balasuriya, a member of parliament known for his focus on financial and economic issues.

Among Balasuriya’s duties will be to foster trade links with Asian nations and strengthen ties with regional multilateral bodies like the South Asian Association for Regional Cooperation (SAARC) and Bay of Bengal Initiative for Multi-Sectoral Technical and Economic Cooperation (BIMSTEC).

Pethiyagoda believed that the new ministerial portfolio “sends a signal of the focus the administration will place on South Asia and Asia more broadly.”

“An Asia-first approach aligns with the government’s ideals and the views of much of its political base,” he said.

An Asia-centric foreign policy was echoed by retired navy admiral Jayanath Colombage, part of a cabinet reshuffle that saw him appointed as secretary to the ministry of foreign relations, a post traditionally held by career diplomats.

In an interview last week, Colombage declared that Sri Lanka should focus on its neighbourhood and pivot away from “Western-oriented diplomacy”. He advocated the foreign service corps to align with changing global dynamics that favour an eastward shift, while balancing great power rivalries in the strategic theatre of the Indian Ocean. 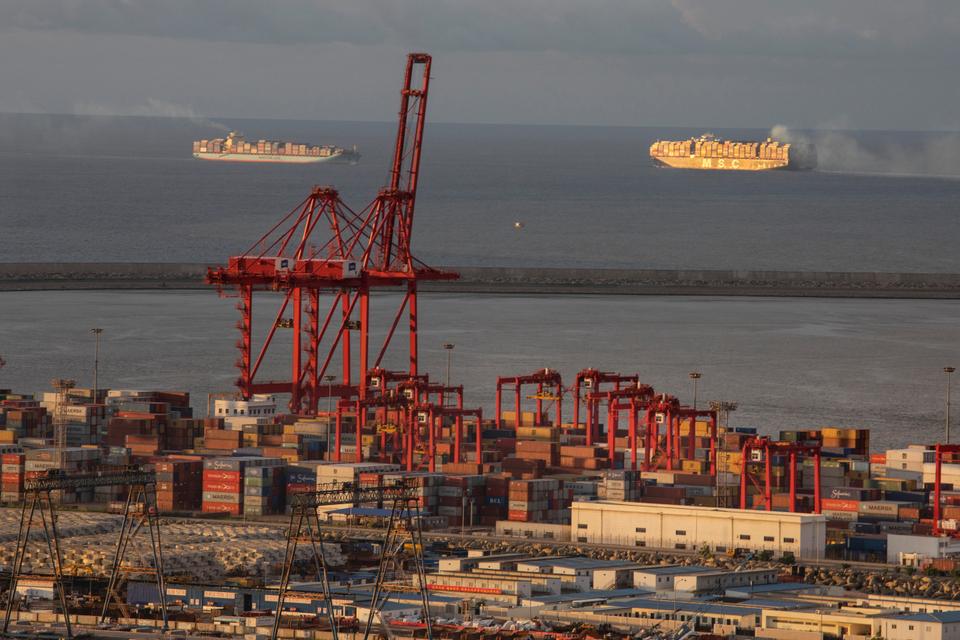 The Chinese-financed Colombo deep sea port is seen as container ships move along the ocean on November 20, 2018 in Colombo, Sri Lanka. In just a few years Port City will be the site of tall glass skyscrapers, a busy financial district, hospitals, hotels and even a theme park. (Paula Bronstein / Getty Images)
Gareth Price, Senior Research Fellow at the Asia-Pacific Programme in Chatham House, observed a reorientation was being aimed not so much at the nation’s Western-centric foreign policy but a diplomatic tendency that centres the West.

Given Sri Lanka’s desire to acquire much-needed investment to jumpstart its ailing economy, forming expedient partnerships in Asia presents less hurdles than it does in the West.

“If you look to the US or Europe, the issue of human rights crops up, which is less the case with potential Asian partners,” Price told TRT World, adding that Colombo’s tilt towards Asia would take place while resisting a binary choice between India and China.

A Senior Analyst at Control Risks, Hemant Shivakumar maintained that these developments will not come at the expense of economic ties with Western nations.

“Countries like the EU and the US will remain key export destinations for the majority of Sri Lankan goods and products, and it is unlikely that the government will imperil these economic avenues,” he told TRT World.

Ultimately, Colombo will have to reconcile the competing interests of two Asian giants vying for influence in the Indian Ocean.

In an attempt to assuage New Delhi’s fears of Colombo being ensnared by Beijing, Colombage reiterated that “as far as strategic security considerations go, it's an ‘India first’ approach.”

The stance will be welcomed by Indian Prime Minister Narendra Modi’s government, who was the first to congratulate the Rajapaksa following August’s elections.

For India, Sri Lanka is increasingly viewed through the prism of its strategic maritime objectives, and it has long harboured concerns over the growing Chinese footprint on its southern neighbour’s shores, heightened after a controversial ‘debt-equity swap’ of the Hambantota Port to Beijing in 2017.

Fears that China is practicing ‘debt-trap diplomacy’ are unfounded; a Chinese SOE paid the Sri Lankans to lease Hambantota Port and provided Colombo with liquidity to repay Western creditors, to which it owes the majority of its debt.

“It was poor decision-making on the Sri Lankan side that led to the debt more than any kind of Chinese scheme,” said Price. “The problem with the previous Rajapaksa government was that there were a lot of vanity projects, and Chinese investment poured in because they wanted them to.”

If there is an underlying logic that will drive Sri Lankan diplomatic strategy, it is economic – and India might be at a disadvantage despite the positive rhetoric coming from the new government.

The overriding imperative for the Rajapaksas is to reduce the country’s foreign debt burden and partners will be prioritised on the basis of who can provide funding to stimulate commercial activity. If India cannot deliver on implementing projects and spurring investment, the administration will look elsewhere.

“Sri Lanka needs financing and infrastructure investment, and China can do it better than India. China’s capacity to build is greater than India’s, and its pockets are deeper. Particularly now with India’s economy taking a major hit,” Price noted.

“If Sri Lanka was not looking to be beholden to China, looking to the Southeast Asian countries would make a lot of sense.”

There is enough evidence to suggest that Sri Lanka will continue to deepen engagement with other Asian states.

“The previous government between 2015 and 2019 had stepped up economic and commercial relations with Singapore and Malaysia,” Shivakumar said, highlighting that Singapore was among the top ten investors in Sri Lanka and Malaysia had indicated in 2018 plans to pursue a free trade agreement. Bangladesh and Japan could follow soon.

Shivakumar also believed that the Rajapaksa administration will continue to favour economic ties with China, despite security objections from those like India.

“Effectively, though the [Sri Lanka] government will seek to pursue commercial opportunities with India and Japan to help offset domestic criticism over dependence on China, this will remain limited.”

In May 2019 India and Japan signed an MoU with the government for a high-profile Colombo Port project worth $500 million, which faced domestic opposition from parties who saw India and Japan following China’s lead in trying to “spread their tentacles” in the country’s strategic assets.

The government assured both sides that the project would be expedited after the elections were over, but questions remain.

Foreign ports are a transshipment hub for nearly 30 percent of Indian export-import cargo and the Colombo port accounts for a large chunk of it, making Sri Lanka an invaluable “blue water” access point for India.

“Alternatively, the government will likely intensify efforts to secure a moratorium from foreign lenders on debt repayments even as it initiates fresh negotiations for a new IMF loan programme,” Shivakumar added.

While the government hardly wishes to get involved in a Sino-Indian or US-China power struggle, it may not have a choice as it seeks to preserve its long practiced policy of non-alignment. With heightened external geopolitical fissures in the region, balancing infrastructure diplomacy between China, India and the US will be a daunting challenge.

For the Rajapaksas, it’s a balancing act motivated by economic development – a pragmatism likely to be at the centre of Sri Lankan statecraft.
Amar Diwakar - TRT World