The 43rd session of the United Nations Human Rights Council (UNHRC), which runs until March 20, will be crucial for Sri Lanka as the government has decided to withdraw co-sponsorship of resolutions 30/1, 34/1 and 40/1 under which the government undertook accountability and reconciliation after the civil war ended in May 2009.

In her statement to the UNHRC, High Commissioner Michelle Bachelet conceded that while some progress has been made in promoting reconciliation, accountability and human rights, she was concerned about the inability of the government to deal with impunity and to reform institutions, which may trigger a recurrence of rights violations.

She urged the UNHRC to closely monitor developments in Sri Lanka and called for full implementation of the resolutions.

Meanwhile, the government of Sri Lanka on Feb. 20, while withdrawing co-sponsorship of resolution 30/1, pledged to continue to work with the UN and seek capacity building and technical assistance in keeping with domestic priorities and policies. It also announced its intention to work toward closure of the resolution in cooperation with the UN.

Sri Lanka has until March 2021 to implement its commitments to the UNHRC, especially regarding the creation of a war crimes investigation panel.

As Bachelet made clear to the UNHRC, some progress has been made in promoting reconciliation and accountability and human rights in line with the co-sponsored resolution.

A step in the right direction and one that was absolutely essential for the accountability process was the creation of the Office of the Missing Persons as well as the Office for Reparations.

“The commitments made by the previous government had contributed to the lapses that resulted in the Easter Sunday attacks in April 2019,” the government stated while declaring the unilateral decision to withdraw from co-sponsorship of the resolution.

A Commission for Truth, Justice, Reconciliation and Non-Recurrence was not established, though the government agreed to formulate mechanisms under the provisions of the constitution without the participation of international judges and proposed hybrid special courts. These were not established during the period of the unity government as the then prime minister and president were acting against each other in an ugly power consolidation process.

As promised, the reform agenda, the new charter, reforming the electoral process and solving the national question of federalism versus autonomy were not resolved.

The impact of the 19th amendment has had on Sri Lankan society is enormous and self-evident. The civil service, police and judiciary are independently exercising their powers with renewed vigor due to the enabling situation created by constitutional reforms.

President Maithripala Sirisena in October 2018 sacked Prime Minister Ranil Wickramasinghe and appointed Mahinda Rajapaksa and dissolved parliament. However, due to the powers granted by 19th amendment, the judiciary declared these moves illegal and reinstated Wickremasinghe. That is how the reformist agenda was carried out during the previous regime.

It is interesting to know how the question of accountability came to the fore. When the conflict finally ended in 2009, President Rajapaksa met with UN secretary-general Ban Ki-moon and agreed to an accountability probe. But Rajapaksa did not listen to the international community’s call for wartime accountability until he was defeated in January 2015.

The change of government averted possible international sanctions over Rajapaksa’s failure to adequately deal with war crimes. Some claim that up to 40,000 Tamils were killed in the final months of the civil war.

Meanwhile, the Sri Lankan delegation to UNHRC meeting in Geneva left on Feb. 25. Foreign Minister Dinesh Gunawardena officially informed the council on Feb. 26 of the government’s decision to withdraw from co-sponsorship of resolutions 30/1, 34/1 and 40/1.

“Procedurally, in co-sponsoring resolution 30/1, the previous government violated all democratic principles of governance and the resolution seeks to cast upon Sri Lanka obligations that cannot be carried out within its constitutional framework and it infringes the sovereignty of the people of Sri Lanka and violates the basic structure of the constitution and that is why Sri Lanka was prompted to reconsider its position on co-sponsorship.”

The Sri Lankan government has six months to devise new strategies before the rights body meets in September. 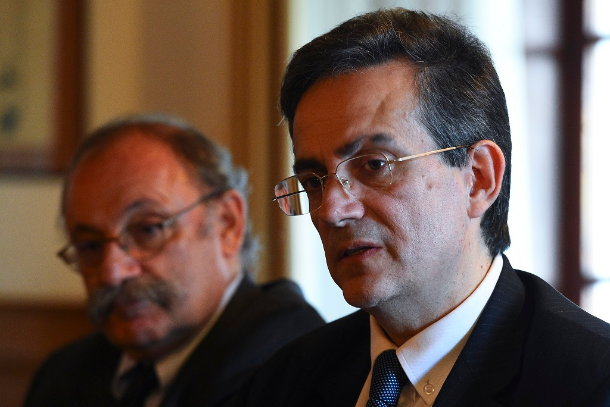 Thierry Mathou (right), director for Asia and Oceania of the French Foreign Ministry, speaks to reporters in Colombo on Feb. 27 after talks with Sri Lankan leaders. France asked Sri Lanka to end impunity and ensure ethnic reconciliation a day after Colombo withdrew from a UN resolution investigating alleged atrocities during its civil war. (Photo: Ishara S. Kodikara/AFP)
The Tamil minority is uneasy with the situation created by withdrawing co-sponsorship of the resolution calling for an investigation into alleged rights violations committed during the long civil war. Civil society organizations and religious leaders should address these issues as soon as possible.

Though the government has withdrawn co-sponsorship of the resolution, it is effective until March 2021. The government will have to face the UNHRC again in September. If the obligations set by the rights body are not fulfilled, an embargo could ensue.

“Domestic processes have consistently failed to deliver accountability in the past and I am not convinced the appointment of another Commission of Inquiry will advance this agenda. As a result, victims remain denied justice and Sri Lankans from all communities have no guarantee that past patterns of human rights violations will not recur,” Bachelet said in her address to the UNHRC on Feb. 27.

The reaction of the international community will become known to the public during the coming days of the UNHRC meeting.

As the government has asked the council to announce its intention to work toward closure of the resolution, one wonders whether there will be any accountability and reconciliation process in the future.

Replying to the government’s charge of treason against the earlier regime, opposition leader Sajith Premadasa said the Mahinda Rajapakse government, four days after the end of the conflict in 2009, acknowledged that human rights violations had occurred during the last stages of the war and agreed to an accountability probe. That is why the whole country is held accountable to the international community today and why the present government is charging others with treason.

Kingsley Karunaratne is administrative secretary of the Rule of Law Forum, which is affiliated to the Asian Human Rights Commission. His organization works for fundamental redesigning of justice institutions to protect and promote human rights. The views expressed in this article are those of the author.