A giant panda reserve in China on Friday released rare videos of the world's only known albino giant panda roaming its natural habitat in Wolong, Southwest China's Sichuan. The giant panda is believed to be three years old and has started an independent life.

The Sichuan Wolong National Nature Reserve Administration said that the two videos recorded in February 2020 and released on Friday were the second time in more than a year the albino panda had been spotted by infrared trigger cameras.

In the first video, the panda is seen roaming in the snow, sitting with its back to the camera close to the tree where the camera is installed.

Three days later, it passed through dense forests and crossed small rivers and was recorded by  another camera on a mountain ridge a kilometer away. It was seen in the video for about 10 minutes. 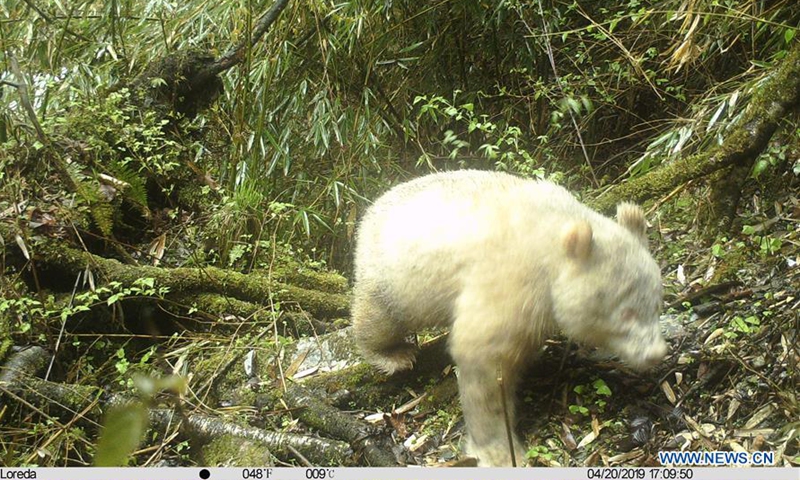 The panda was shown to have bright white fur, steady steps, a strong body, leading experts to determine it is healthy and about three years old.

While extremely rare, albinos can occur in numerous groups of vertebrate animals, according to Li Sheng of the IUCN Bear Expert Group and the Peking University School of Life Science. The genetic mutation prevents melanin from being synthesized.

The panda was first documented in May 2019 and has grown and appears stronger in the videos released on Friday.

In the two video clips taken last February, the panda is living on its own and experts believe it has left its mother's care and living independently.