Sportsmen are usually known to be ‘Gentlemen’. But since of late, decency, integrity and skills seem to be all lost in sports, sportsmen and administrators alike when the ultimate goal of all concerned seems to have shifted towards seeking fame, money and power at any cost! One might think that this is limited to Sri Lanka Cricket, but no…, corrupt players and abuses of power by those in authority have raised serious questions on the status of the sport of powerlifting as well!

While it is a pleasant sight to see sports parents of yesteryear passing their mantle or skills to their kids, what is NOT acceptable is when such parents become administrators of whatever sports bodies SOLELY to favor their offspring or to give them an undue advantage over more deserving athletes! Unfortunately, this is precisely what is happening currently in the small community of powerlifters in Sri Lanka.

Mothilal Jayathilake, having represented Sri Lanka in powerlifting once upon a time, has no doubt trained and molded his son, Ransilu Jayathilake to be champion material. And we must congratulate both the father and son duo for all their individual and combined achievements and give them their due credit. 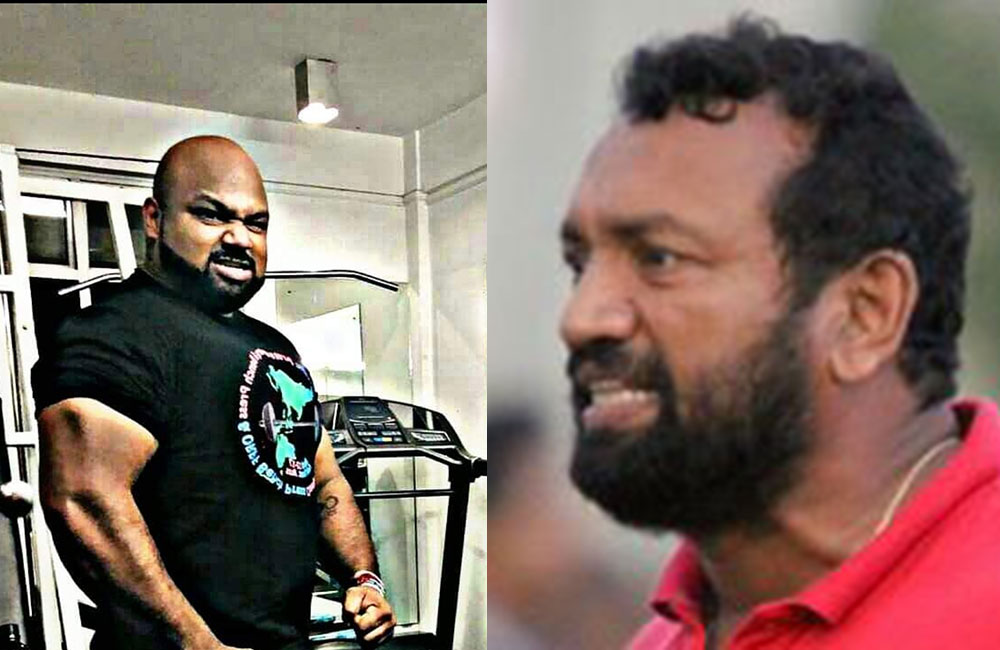 But when this same father/son duo manipulate acceptable selection procedures to favor themselves and their personal friends and favorites, does it not spell doom for the sport and its future? A Peruvian-American author by the name of Daniel Alarcon once said, “Nepotism is the lowest and least imaginative form of corruption.” And it cannot be any truer than in the case of how the Jayathilakes ‘handle’ the selection of candidates for international powerlifting events. And I sincerely hope the following expose would shed light on what really goes on with the sport in this country,

1. Come September, the Commonwealth Powerlifting Championship is to be held in Canada and Asian Games in December…, and the problem started when the Interim Committee formed 2 months ago to make selections, caved in to pressure exerted by the Senior Jayathilake, who then self-appointed himself as Head Judge in deciding who makes the final cut of the team that goes to Canada.

a. Mohthilal Jayathilake, banned from entry to USA allegedly for human smuggling, is in a clear conflict of interest for being the ultimate authority/judge when his own son and members of the team coached by him at his own academy, the Colombo Powerlifting Club (CPC) are among the competitors.

b. During the National Qualifying Meet held on July, 05, 2019, though all competing athletes were asked to be present at 7.30am, there was no published schedule and all those present were packed like sardines in a waiting room while officials were seen taking breaks at their whims and fancies. While the Final Lifts and the heaviest weight lift category were conducted only at 2.30 am the following day…, deliberately of course, it must be mentioned that in this kind of sports, it is important for athletes to have proper rests and to be in a proper mental state of mind to give their best. Not surprisingly, the deliberate delays and athletes being hassled were meant to make sure Jayathilakes and their allied officials including one Mr. S.Y.W. Rupasena, fail all those athletes coming from rival fitness clubs while Jayathilake Junior was automatically given the all-clear green-light based on his past performances. And this was unethical and was in clear violation of rules of any sports bodies conducting National Qualifying Meets.

c. In addition, there is a video showing the officiating judge, Mohthilal Jayathilake raising the white flag first then having realized that the female contestant is from the rival club, goes on to raise the red flag thus disqualifying the contestant. The video is found below.

d. Interestingly, the Jayathillakes removed the TV and the Jury Panel when the real challengers (heavy lifters) to Ransilu Jayathilake and his team began to lift. This is to eliminate any trace of abuse of power or favoritism being on record!

2. The married Ransilu Jayathilake and the reigning champion was banned from the sport for 2 years for doping (Methylhexaneamine) in 2011. Apparently, he seems to be having a history of disorderly conduct with female gym-goers as well as being well known in the night-clubbing circuit for harassing female guests. Though it is his personal life, a sportsman misbehaving is indeed unbecoming of a gentleman!

Furthermore, bad behavior being the least of his concerns, he sends a message on WhatsApp to another athlete bragging about how he manipulated the judges and the selection procedure to suit him and members of the team coached by his dad and his private academy. Extracts of the message are as follows – “Mess with me, and I will make sure you and your sheep squad will run out of power lifting soon…, then in another message, Ransilu says – “Ha ha I took ur whole team down alone bro… from changing the federation… putting judges.. it is all me... fight back and see what you all gonna get..)))”! 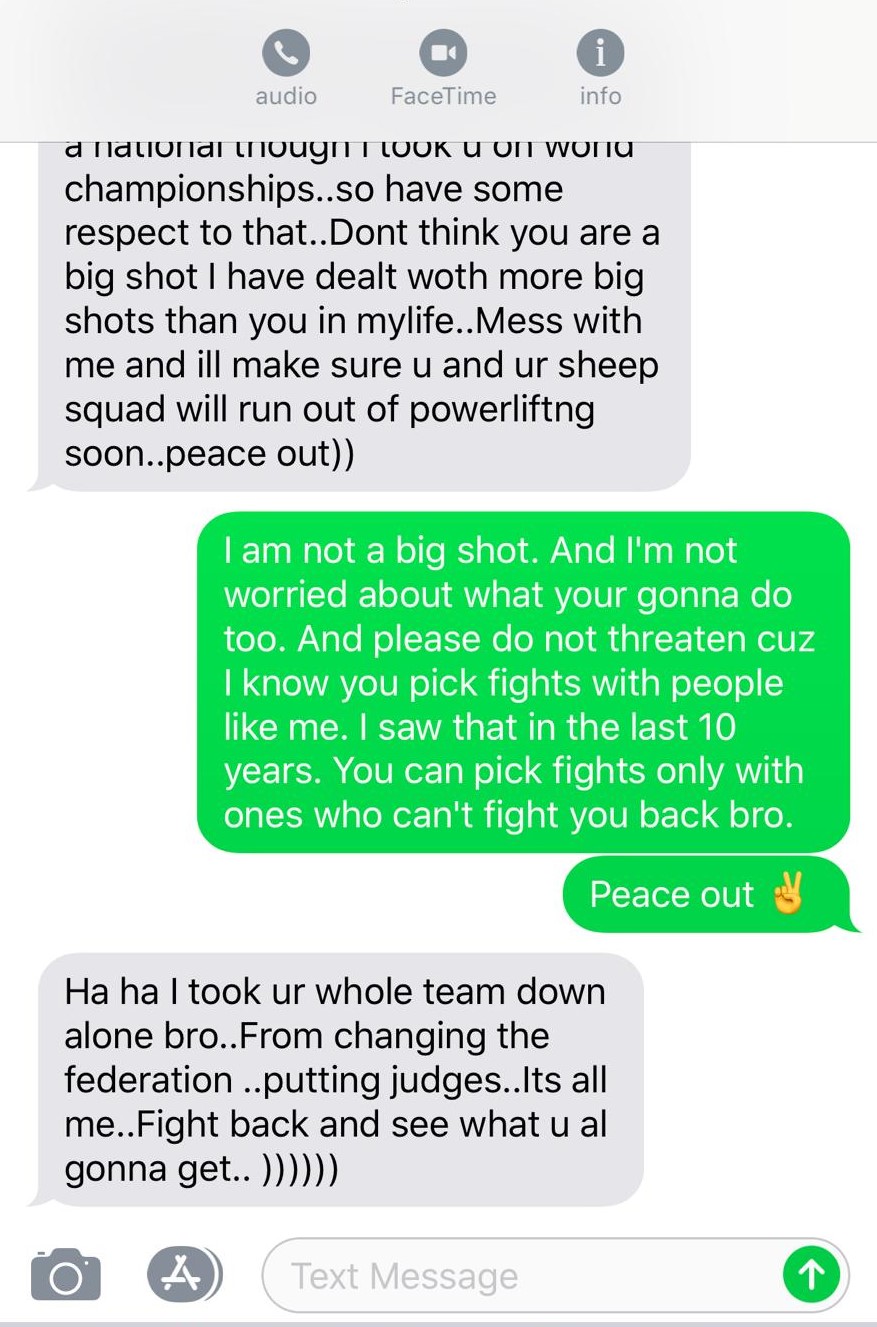 It is hoped that the screenshot of the WhatsApp messages appearing on this article will draw the attention of the Honorable Minister of Sports, Mr. Harin Fernando. And let us also hope that he would finally take serious note of lapses and abuses of power in the Interim Committee as well as in the main body and to take meaningful steps to enable rightfully qualified sportsmen and sportswomen to represent Sri Lanka…, and before the sport dies a natural death!

Politicians and subject Ministers can come and go…but it would be a crime to play with the lives and aspirations of thousands of deserving athletes, especially when they come from ‘not-so privileged’ backgrounds. Minister Harin Fernando can have friends among the influential lot…, but he will be certainly judged at the next elections should he continue to ignore irregularities raised above!