At 3.30 am on September 10, Admiral Ravindra Wijegunaratne, the country’s highest ranking military official, boarded a Qatar Airways flight bound for Singapore. The Chief of Defence Staff (CDS) was travelling overseas to attend the 208th National Day celebrations in Mexico, according to his Office. The trouble was, September 10 was also the day Admiral Wijegunaratne was due to report to the CID to record an official statement regarding the allegation that the top military officer had harboured a suspect – a Navy man who was wanted in connection with the abduction and suspected murder of 11 Tamil youth, including five students.

Later that day, a letter was dispatched to the Fourth Floor – the famous CID headquarters. It was delivered by an official from the CDS’ office. The letter officially notified the CID that the Admiral had been called away on an official visit overseas, and would not be able to appear at the CID offices as scheduled last Monday (10). Instead, the letter requested CID officials to provide a fresh date after September 19, when he was scheduled to return to the island.

President Maithripala Sirisena summoned an emergency Cabinet meeting at high noon on Thursday, reportedly, to discuss the issue. Ministers have been tight-lipped about the extraordinary Cabinet meeting, but reports surfaced about frank exchanges regarding the CID move to arrest the nation’s highest serving military official on charges of harbouring a fugitive. The suspect was subsequently arrested by the CID last month. A decision on the issue was deferred until the Prime Minister returned from an official visit to Vietnam on September 14.

On Friday, during a breakfast meeting with editors, President Sirisena revealed he had pitched into the CID and Attorney General Jayantha Jayasuriya, over the continued arrest of military officials, including high ranking officers in high profile murder and abduction cases, and their failure to file cases against any of them since 2015. The President said, it was his belief that the CID should not arrest and detain military officials unless they could file indictments because, this was leading to accusations against the Government that it was on a witch-hunt targeting the military. The President said, he had called for progress reports from the IGP on all the controversial cases involving attacks on journalists and the abduction of 11 Tamil youth in 2008. In none of those cases had the CID been able to file cases against any of the officials arrested since 2015, he added. If there were charges against these officers they should be prosecuted, rather than being arrested and harassed for months, only to be released on bail later, the President charged during the briefing. It is not clear why the CID has been unable to prosecute any of these cases so far, but prosecutors and investigators point to procedural delays, capacity issues within both the CID and the AG’s Department, and the difficulty of obtaining information and documents from the armed forces about matters pertaining to the high profile investigations.

On Friday night, the Government Information Department issued a media release, denying it was ‘hunting war heroes,’ as some claim, underscoring the fact that the CID investigation into the abduction of 11 youths commenced in 2009, when the Rajapaksa Government was in power. The Government release said, while reports claiming that the CDS was to be arrested were circulating, the Admiral had only been summoned for a statement to be recorded by the CID regarding the allegation that he had helped the Navy suspect evade court or prevented his arrest by giving him protection. “However, most people and media had reported this situation to indicate that the arrest of the CDS was imminent. The CID had no such intention,” the Government release claimed.

The political firestorm over the alleged involvement of Admiral Wijeguneratne has been some time coming.

Ever since reports surfaced about how the CDS clashed openly with CID Director SSP Shani Abeysekera, at a meeting that included several Ministers and the Defence Secretary, the Navy abduction case has been in the spotlight, and the CID and the CDS have been on a collision course. At the fateful meeting, Wijeguneratne challenged SSP Abeysekera to prove the charge that he had helped Hettiarachchi alias Navy Sampath to flee the country. Abeysekera appeared to have accepted the challenge, reporting details to court citing a navy official’s evidence and an alleged transfer of funds to Hettiarachchi’s account from a Navy account maintained at a state Bank. The court has ordered the bank concerned to release information about the said transaction to the CID.

In its B Report (B2527/80) filed at the Colombo Fort Magistrate’s Court, the CID observed that the current Chief of Defence Staff, who was Navy Commander at the time, had harboured the suspect – Chandana Prasad Hettiarachchi alias Navy Sampath – who was wanted in connection with the abduction for ransom, illegal detention and suspected murder of the 11 youth. The former Navy Commander had failed to produce Hettiarachchi to the CID, despite being officially informed, thereby intervening to prevent the legal arrest of a suspect. The former Navy Commander and current Chief of Defence Staff had committed crimes punishable under Sections 209, 174 and 183 of the Criminal Procedure Code, the CID B Report to court further added. The offences pertain to the omission to give notice or information to a public officer by a person legally bound to give notice or information (174), obstructing a public officer in the discharging of his public functions (183) and harbouring an offender (209).

Based on the CID progress reports on the investigation into the Admiral’s conduct to allegedly shield Navy Sampath, Fort Magistrate Lanka Jayaratne on August 29, ordered the CID to initiate steps necessary to arrest the Chief of Defence Staff if the investigating officials had sufficient evidence to frame charges against him.

A senior investigating officer at the CID admitted that the Department had not seen Admiral Wijeguneratne’s departure overseas coming. In fact, CID officials visited Admiral Wijeguneratne at the CDS office at the BMICH on Friday, September 7, to request him to report to the CID HQ on Monday (10) to record a statement regarding the allegations. News that the CDS has left the country to attend an official function in Mexico, only reached the CID officers at 2 pm last Monday.

The CID investigation against the senior military official has been filed separately under the B Report number B 9527/2018. Lawyers for families of the missing boys expressed fear in court last Wednesday that Admiral Wijeguneratne could continue to evade questioning, which could hamper investigations into the Navy abductions case. Attorney-at-Law for the families, Achala Seneviratne, requested Magistrate Jayaratne to issue a travel ban on the Admiral. The Magistrate said, the request could be made when the case against Wijeguneratne is called under the separate B Report. However, that B Report has no calling date, which means there was still no inquiry worth reporting to Court, even though the Department claims it has enough evidence against the senior military official.

According to the CID, Wijegunaratne allegedly protected the main suspect Hettiarachchi known by the alias ‘Navy Sampath’ as the search for him by the CID intensified. Sources within the CID said it had sent two messages to the administrative branch of the Naval Headquarters, for the attention of then Navy Commander Ravindra Wijegunaratne on March 1 and March 28, 2017, requesting the Navy to produce Hettiarachchi at the CID Headquarters on March 2 and 31 respectively. These requests went unheeded, but evidence and witness statements have revealed that Hettiarachchi was being harboured at Naval Headquarters in Colombo during this time.

Evidence to support this claim comes from the statement made by the wife of Hettiarachchi, herself. She had told investigators that she visited Hettiarachchi thrice while he was housed at the HQ between March 3 and March 31, 2017, despite the Navy insisting at the time that they had no knowledge of his whereabouts. Her statement is also backed by Lt. Commander Geethal Laksiri who cooperated with the CID. In his statement to the CID, Laksiri claimed Hettiarachchi was housed in the adjacent room to his, in the Officer’s Mess when the CID was looking for him. Once encountering both Wijegunaratne and Hettiarachchi in the elevator, Laksiri claimed he witnessed a damning conversation between the two. According to the CID B Report, Laksiri claims that when he saw Hettiarachchi leaving the Mess one day, the then Navy Commander Wijegunaratne had asked him where he was headed. Hettiarachchi had replied that he was going to the Light House to meet his wife, to which the Commander had retorted: “If you wander about and get caught by the police, there is nothing I can do about it,” - according to Lt. Commander Laksiri’s statement reported in the CID’s B Report seen by the Sunday Observer.

According to Laksiri’s statement to the CID, Hettiarachchi had also shown him a bagfull of money just before disappearing from the Naval Command. Hettiarachchi had claimed that Commander Wijegunaratne had provided the money for his expenses, Lt Commander Laksiri told the CID. The CID during a previous court sitting reported that the Sri Lanka Navy had transferred half a million rupees to Hettiarachchi from a special account maintained at the Bank of Ceylon.

The CID told court that it believed the money may have been utilised to obtain false ID documents found in Hettiarachchi’s possession when he was arrested in August 2018. OIC of the Gang Robberies Unit of the CID, Nishantha Silva told Court at the last hearing on Wednesday (12) that the Department was investigating the money trail further.

An initial tip off by the then Navy Commander Wasantha Karannagoda in 2009 led to the explosive revelations about a chilling abduction for ransom racket, allegedly run by officers serving in the Sri Lanka Navy. Investigations into the racket began in 2009, but picked up steam only after the fall of the Rajapaksa regime in 2015. The case has implicated several senior naval officials, including former Navy Spokesman D.K.P. Dassanayake. Rajiv Naganathan, the A/L student from Kotahena who had just got admission to a university overseas and four friends who had gone out with him to celebrate ahead of his departure to the UK went missing from Dehiwala in September 2008.The other boys were abducted from other suburbs in Colombo, residents of Mannar and Trincomalee who were working in the capital or visiting the city. The other six young men were abducted between August and October 2008. The abducted boys were initially held in detention at the Naval Prison at Chaithya Road, and subsequently transferred to the ‘Gunside Base’ at the Navy’s Easter Command HQ in Trincomalee, CID investigations have revealed. CID officials have visited holding cells in the ‘Gunside Base’, where they have studied etchings on the walls, to determine if the handwriting matched any of the boys who went missing in 2008.

Tomorrow, September 17, marks a decade since families of the 11 boys began their long struggle for answers about the fate of their sons. Sarojini Naganathan, the mother of starry-eyed university freshman Rajiv, had thought the investigation was getting traction in recent months. But with the case into her son’s abduction flying into massive political crosswinds this week, her quest for justice just got a little harder. 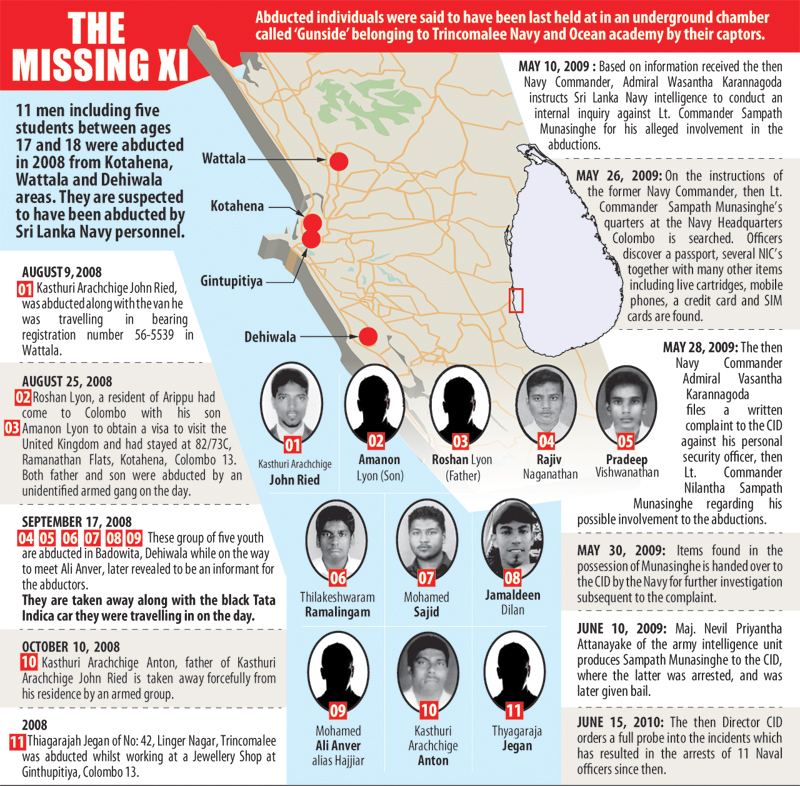